Clean water and air have been making big news for a while now. Lots of alarming statistics and hand-wringing surrounds the topics of clean waterways, healthy oceans and reduced impact of mass shipping, but every day it seems, we’re losing the battle. That’s why it’s refreshing to learn about companies whose dedicated efforts are making a difference, like The Ocean Cleanup. 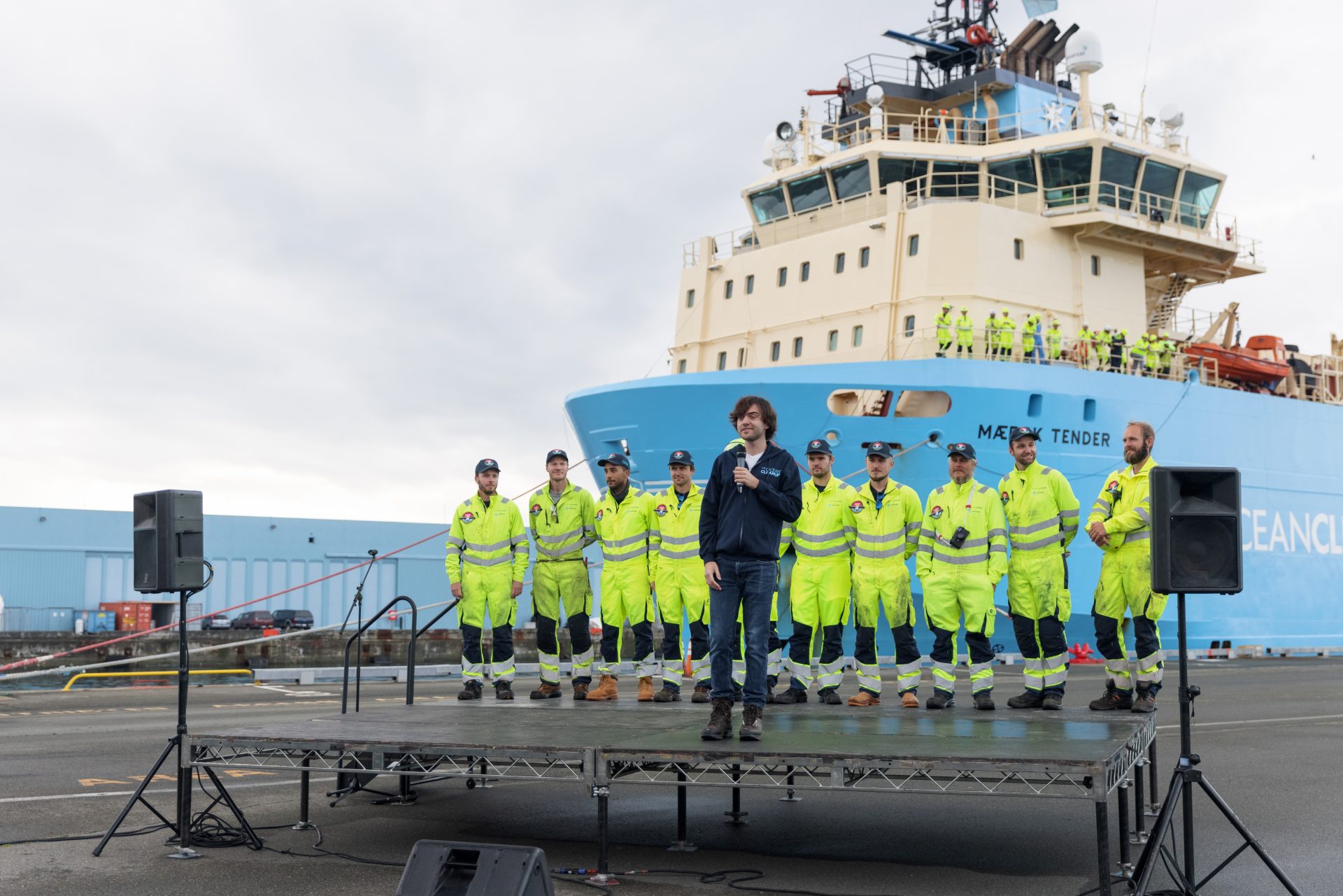 Above: October 20, 2021: Boyan Slat, CEO and Founder of Ocean Cleanup sharing a few words about the test campaign of System 002 and the next steps, prior to the system heading out to the Great Pacific Garbage Patch to capture more plastic. Image Credit: The Ocean Cleanup.

Three years ago, we wrote an update about The Ocean Cleanup, an initiative first introduced in 2012 as a TEDx talk. Boyan Slat, a 20-something entrepreneur at the time, designed a prototype device to clean up the fast-growing Great Pacific Garbage Patch and despite many naysayers, a decade later, his Ducth company is making meaningful progress.

The Patch is a complex problem. Two trillion pieces of plastic and debris are floating between Hawaii and California in tracts twice the size of Texas. The mess contains everything from toothbrushes to toys to fishing nets. Some of it floats at the surface and some of it sinks so it’s not easy trying to capture and remove it.

Marine life, including seabirds, fish and marine mammals, suffers from plastic ingestion and entrapment. Additinoally, the Patch blocks sunlight and interferes with the growth of natural algae and plankton which disrupts the food chain. This toxic soup is absolutely impacting humans and will continue to do so. Asia and North America are responsible for the vast majority of trash patch but other than an altruistic mindset, there’s no incentive (money) to remove it.

Slat and his company, The Ocean Cleanup, built a 2,000-foot capture system which consists of a U-shaped boom floating barrier made up of sections of tube towed by two vessels and a large net in the middle that that floats along, swallowing whatever is funneled in. That first was System 001/B was launched out of San Francisco Bay into the Pacific Ocean with the aim of trapping plastic debris and waste that floats into the ocean. It was followed up by System 002 which launched from Vancouver in 2021. 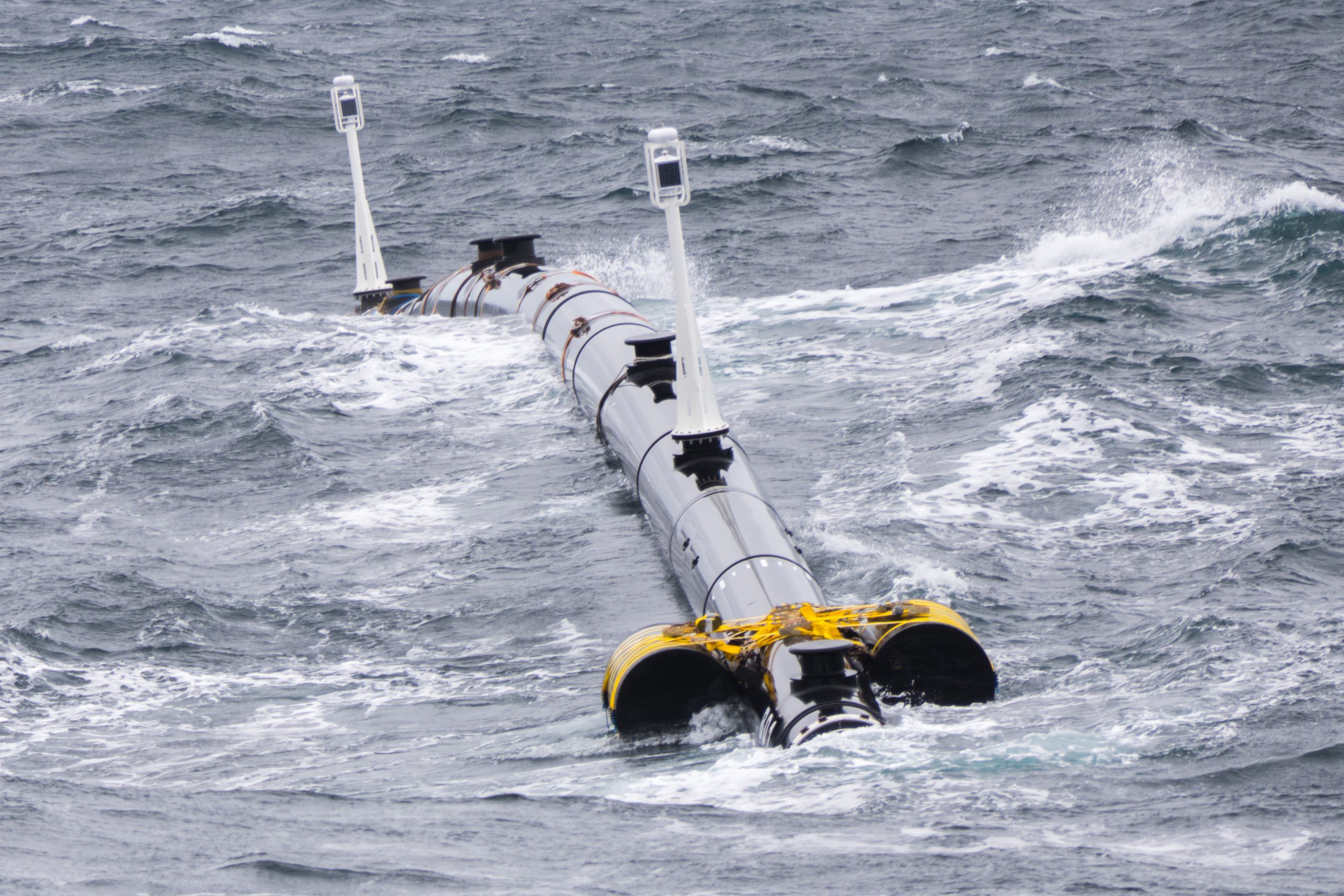 Above: An undated handout photo made available by The Ocean Cleanup on 08 September 2018 shows a 120-meter unit of the first cleanup system being tested in towing configuration for two weeks at sea in the Pacific Ocean, between May and June 2018. Image Credit: EPA-EFE/THE OCEAN CLEANUP HANDOUT.

To the surprise of many, the second system had very impressive success with tackling the Great Pacific Garbage Patch off the western coast of the US. So far it has reportedly collected nearly a quarter million pounds of trash which translates to the weight of two and half Boeing 737-800s. 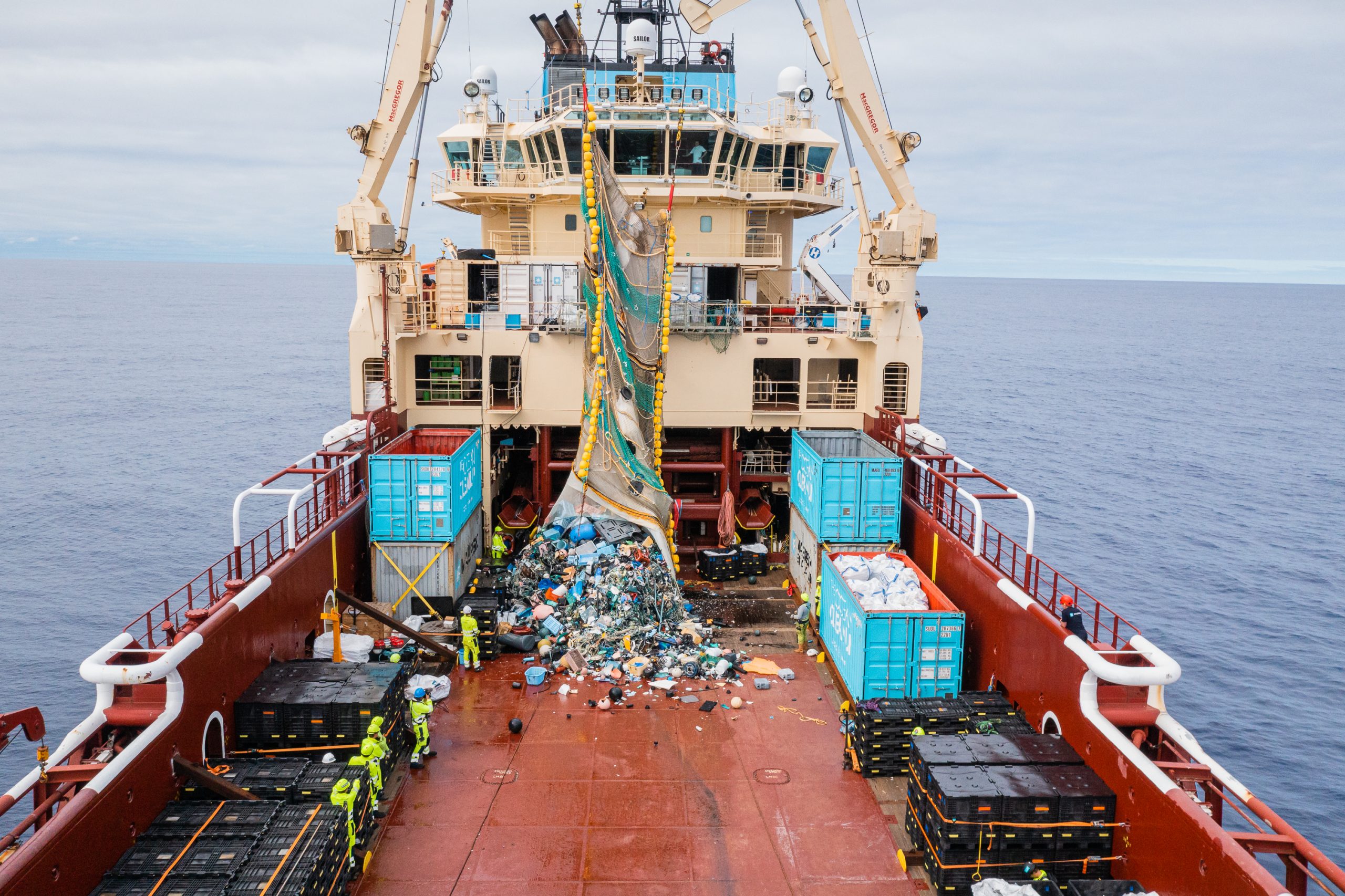 Above: System 002 extraction zone emptied on deck of ship. Photo by The Ocean Cleanup.

The problem is that the Patch is estimated at being 2.6 million pounds so what’s been done to date is but a dent. Still, if they manage to replicate this kind of haul 1,000 times, the Patch could disappear leaving safer ocean routes and a much healthier environment for sea life that is killed by this unsavory soup.

Slat’s second working model hit a milestone and also validated the concept. System 002 will continue harvesting plastic in the Great Pacific Garbage Patch. However, the company has now designed System 03 that’s meant to capture 10 times that of the previous system. The new rig is larger (three times bigger) and has improved efficiency, so it lowers the per pound cost of trash removed. The upgraded Ocean Cleanup system is also expected to be the blueprint design for scaling to a fleet of systems. 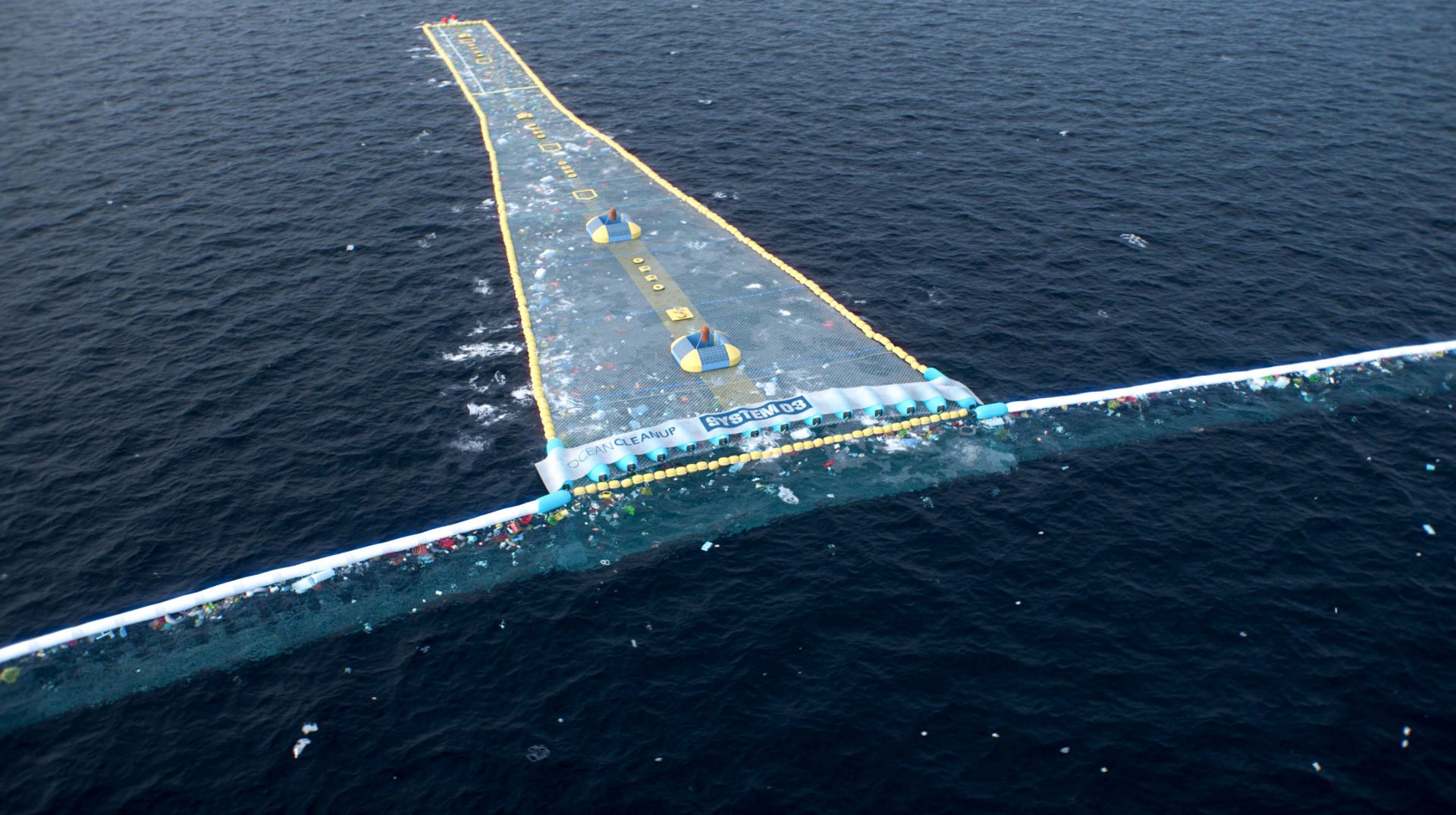 Above: A rendering of the retention zone of System 3. Image by The Ocean Cleanup.

The limiting factor to this entire enterprise is the availability of towing and collection vessels. These tugs move at about 1.5 knots which isn’t particularly fast but that’s also good because it gives sea life a chance to get out of the way of the gaping mouth of the collection bag. The problem is there aren’t enough of them to deploy all the rigs needed.

Nevertheless, defying all odds (and oddsmakers), Slat’s machine is working and if the company continues to raise funds and scales up with multiple systems, the Pacific Patch may be mostly resolved in just a few years. Then the focus may shift to other patches (in the Atlantic and beyond) by 2030. Let’s hear it for vision and persistence.

No attempts to clean up the Patch will work if we don’t focus on slowing down what goes into it. Nets and filters are a start, but they have drawbacks which is why the new Bubble Barrier hold so much promise. Another Dutch startup, The Great Bubble Barrier, has completed a proof-of-concept installation of their curtain of air bubbles in Katwijk, Netherlands to prevent trash from flowing down to the North Sea.

The bubble curtain works on an air supply and a catchment system. Air is introduced into a perforated tube that lays on the bottom of a river. This generates a current that brings plastics to the surface but doesn’t allow the debris to travel farther downriver. Instead, the natural current pushes the plastic diagonally across the river into a catchment system. It’s a 24/7 proposition and its true beauty is that it doesn’t create a hazard to navigation to passing boats and ships which can sail through the curtain. And just like The Ocean Cleanup, it’s a scalable proposition.

Fishing nets and plastic tubs are a problem but so are microplastics that are created as the plastic mess disintegrates. Tiny particles cannot be tackled directly by The Ocean Cleanup or The Bubble Barrier. Discussions around the need for netting and filtration systems on Asian rivers have circled around the to capture the minute pieces before they make it to the ocean but so far, it has been mostly talk.

One company that’s taking microplastics seriously and doing something about it is Suzuki. They’ve created a filter that is integrated into their outboard motors which picks up microplastics in any area of water where it operates.

In October 2020, Suzuki introduced their microplastic collecting filter that brought in debris with the cooling water needed for the engine. Recently, they announced that they’ve started production on five mid-sized motors and will be offering the filter as standard equipment. This is a limited solution but if it catches on, lakes, rivers and even coastal areas could benefit.

Clean water is a top priority and another way to protect is to dump less propulsion related pollution into it. That’s why GT Green Technologies and Pei Tech have teamed up to harness wind power to enhance performance and cut costs on cargo ships. It’s likely that retrofitted ships can expect a fuel savings 10%-30% while new builds with the system may enjoy up to a 50% fuel savings.

With today’s prices, the largest shipping expense is fuel, so companies are motivated to invest in wind propulsion solutions. A happy coincidence is that wind systems also help with tightening emission restrictions. There is a direct monetary benefit here which makes it easier to fund than giant ocean cleanup vacuums which benefit the environment but neither save nor generate money.

The GT wingsail uses air-flow technology that produces an impressive amount of thrust per unit size but the system is also easily stowable when not in use. Think of this solution as giant modular sails on a containership. There have been case studies involving cargo ships successfully experimenting with kite wings to reduce fuel consumption but those can be difficult to control, especially in squally ocean weather. Stowable sails are now making inroads into the maritime sector with the goal of a carbon-neutral future.

We won’t reach our green goals without continued initiatives on multiple fronts and the four efforts described above are a good start. Whether it’s cost- cutting measures or crowdfunded altruistic approaches, all efforts to keep our waters cleaner and our planet healthier is welcome and at this point, critical.